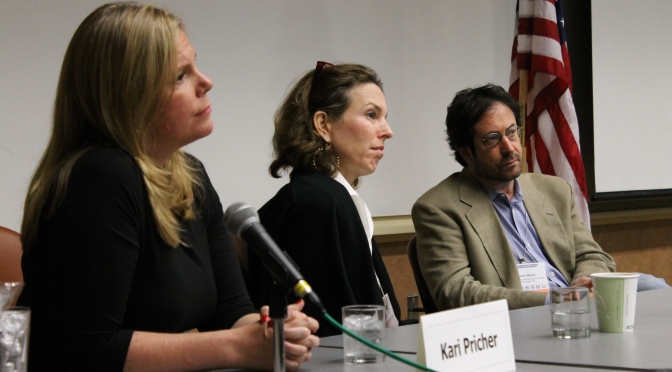 “Reber was at the meeting. He’s OK, but the guy sitting next to him is dead.”

These chilling words gave Pocono Record’s executive editor, Christopher Mele, the first notice that one of the publication’s new staff reporters, Chris Reber, had been in the midst of an open gunfire rampage during a Ross Township municipal meeting last August.

Reber was able to walk away from the scene unharmed, but the fatal shooting left the Pocono Record in a panic with national news sources breathing down their neck for more information.

Tragedy can strike anywhere and every newsroom is faced daily with the chance of covering a major event in their area. The most important step for a newsroom is to plan in advance is preparation, and report from a professional perspective on the issue.

From sex-trafficking in Thailand, to the Newtown school shooting, the panelists have covered a variety of tragedies during their professional career, and were able to address a variety of important issues that journalist face during these situations.

“Every newsroom should have some mechanism,” said Meyer.

“I think it starts before you even go out on a story. Define a mission with your team and make sure that whoever is [covering the story] is able to talk about it,” said Pricher.

The panel advised the room to give their reporters the flexibility to take a day or two off from work after they have covered a tragic event.

“Create an atmosphere ahead of the story, and making sure people feel comfortable asking for the help that they may need. It is our responsibility to do that,” said Pricher.

“It’s very easy to get lost in that tunnel of ‘I have to get this [information] at all costs’ …For me it is quelling the voice of ‘I have to know everything.’ You can ask questions off the record,” said Jones.

“Make sure [the victims] feel that they are in control. Don’t send forth a barrage of questions, even if you are working with a deadline,” Meyer said.

According to Pricher, the best way to alleviate some of this pressure is by ignoring the other news media competitors who are covering the same event. The focus should be set on the personal goal of giving the trauma victims a voice.

Jones suggests to think outside of the box to find new ways to tell the story. She gives an example “Bringing the Nigerian Schoolgirls Into View” from the Lens blog of the New York Times. Photographer James Estrin featured items that belong to the captured girls in order to represent their personality and to help tell their story.

An important role of a journalist is to tell the victim’s story without causing more harm to them, or essentially re-victimizing them.

According to the panel, a journalist must be patient and take the time to make sure the interviewee feel comfortable.

The interviewee should also be fully informed about giving an on-the-record statement. 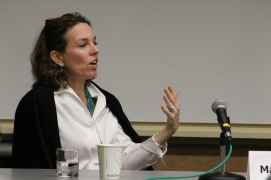 “Let people know what will happen once they yes to the interview,” said Jones. “You don’t want to scare them away, but you also want to sleep well at night. You don’t want to feel that you have duped someone.”

The group unanimously agreed to the fact that if the story will be posted online, a reporter should prepare the interviewee for scrutiny of the public eye.

When it comes to discussing the ramifications to the witness, “Honesty is the best policy,” advised Meyer. 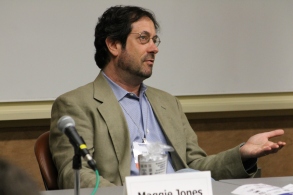 In late 2001, Meyer traveled to Pakistan in an effort to track down Khalid Sheikh Mohammed. He was asked to meet for an inside tip at a restaurant around the corner from the hotel. After much consideration, Meyer decided not to go.

“I felt like a coward for not going out to meeting them,” said Meyer. “It wasn’t until years later when I realized that my decision probably saved my life.”

If Meyer had gone, he would have put himself at high-risk for being taken captive.

Pricher also addressed the personal expectations of being first on the scene of a traumatic event.

“I now understand this psychological ramifications from putting myself into someone else’s tragedy. So now there are times where someone else on my team will go first and I will go in a day or two later, and I have felt badly about that, like a coward … but I can be helpful where I am. There is reporting I can do from my desk.”

In 2013, Each of the panelists  received Ochberg Fellowships for the Dart Center, and are strong advocates for the resources available on the website.

Things to do in State College